America wake up! While Donald Sterling’s comments were idiotic, hurtful, and certainly newsworthy, did you see what Shaquille O’Neal posted about Jahmel Binion? If we are going to be outraged about racism shouldn’t we also be outraged at discrimination against individuals with disabilities?

You can’t turn on the television, radio or the internet right now and not know what Sterling said. He doesn’t want his girlfriend hanging out with his African-American employees – members of the Los Angeles Clippers professional basketball team. By now you have been bombarded on morning television, local newspaper, bloggers and water-cooler conversation on the racist remarks by Mr. Sterling. Sporting America is in an uproar and it has spilled into mainstream pop culture. Oprah Winfrey is commenting, Michael Jordan is discussing, The Today Show and CNN have the round-table discussions and ESPN is in hysteria. Twenty-four hours a day on ESPN. This is the sports version of Flight 370. How can Mr. Sterling be so racist and so blatant about it?
Current and former NBA players all over the nation are standing up against Donald Sterling, even the President of the United States. And the NBA has listened. New NBA Commissioner Adam Silver has been banned Sterling for life by the NBA.

But what about Shaquille O’Neal? He will get another endorsement deal. In case you missed it and you probably have, did you know that Shaquille O’Neal posted a selfie – mocking an individual with a disability this past week? No? Shaquille O’Neal posed a photo mocking Jahmel Binion, and individual with Ectodermal Dysplasias. Mr. Binion idolized Mr. O’Neal and what did Mr. Binion get for that? Public humiliation. I understand that Mr. O’Neal was trying to be funny – but that cannot excuse his behavior. What he did was equally as repulsive and idiotic. While he may not have known about Mr. Binion’s disability, he shouldn’t have assumed otherwise and made such an uneducated gesture.

Do you know that according to the US Census – 56 million people have a disability in the United States? Comparatively, there are 44 million African-Americans. In the United States, individuals with disabilities have the buying power of over $220 billion annually.

If you’re an NBA fan or viewer of ESPN, you should be rightfully appalled and outraged at what happened with Donald Sterling. But, you should be equally outraged that the same individuals crying foul against Mr. Sterling are completely silent in regards to Shaquille O’Neal’s discrimination against Jahmel Binion. This kind of discrimination makes it all the more difficult for Mr. Binion, myself and 54 million other Americans to find relationships, education and employment. Advocacy against discrimination for individuals with disabilities is the last frontier against personal hate in America, it’s time to channel our collective outrage at making a difference. Wake up America! 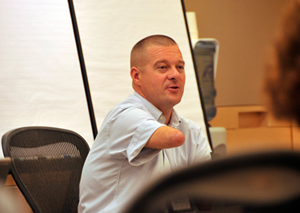